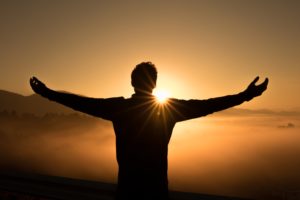 While Jesus is teaching his disciples that his path involves a spiral of rejection and persecution, they miss that part of the lesson entirely. Instead they immediately discuss amongst themselves which of them is the greatest.

People have asked this question as far back as Cain and Abel right up to our current news headlines. We still don’t understand what Jesus was teaching. The Christian life isn’t about dominating everyone who disagrees with us. We’re not called to crusade against other religions. Our life shouldn’t be focused on creating a political regime that forces everyone to live by our tenets.

We’re not even called to defend our faith, at least not in the way we go about it. We’re called to be a witness to our faith. A witness describes what they’ve experienced. It’s not the job of the witness to force the conclusion. No manipulation or retaliation. It’s not about controlling outcomes or hating those who disagree.

Jesus shifts the focus from “being great” to being “the least’. Be everyone’s servant. Take the place of the person who has no social impact on anyone. We may not be able to do this in a literal way because might already have a place of power in society. More realistically, Jesus brings it around to saying that whoever welcomes a child, that is the same as welcoming Jesus, and by extension welcoming God. Welcoming and serving the people in society who have the least amount of social status. This is how we measure our success.