Weep With Those Who Weep 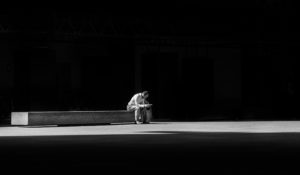 Why is it easier to weep along with a television show than it is to weep with a friend? Is it just me? Maybe it’s because show writers know how to draw out our emotions unexpectedly. Do we listen better when we’re watching a show than when a friend is grieving? Maybe we would listen better if everyone knew how to put their grief into poignant soliloquies.

Over the years when I’ve dared to share a rough-patch with friends or acquaintances, sometimes I was met with gravity, sometimes weeping. More often I’ve received blank stares, Bible pull-quotes, Hallmark-esque Christian encouragement, even a challenge to consider how this will work out for the better. I’ve also been told (years ago) that God was judging me. These responses leave me feeling empty, isolated, even angry. Often the other person is just trying to help, but if they quote the Bible, you’re not supposed to say they’re wrong.

Allow Yourself to Experience Grief

This isn’t a piece about all the sad things I’ve been through, but about allowing ourselves to experience discomfort for the sake of other people. I’m saying that to myself mostly, because when I’ve been on the other end of this experience I’m the one who looks like a deer in the headlights. When someone is in emotional pain and they share that with me, often the first thought (quasi-prayer) to go through my mind is, “I don’t know what to say. What do I do?” I try to think of the caring things people have said to me and I say those things. It feels awkward. It feels like I’m making things worse. I don’t do this well.

Weep with those who weep. It’s so simple and powerful. It doesn’t say cheer up those who weep, avoid those who weep, or make sure those who weep know that God is still in control. It also doesn’t say that your words or actions need to fix the situation. Responding to grief authentically takes vulnerability for both people involved. It might feel awkward or small. I have experienced sharing my grief and having a friend weep with me in response—it’s powerful. When people have allowed my grief to impact them, the pain is shared, the weight is lighter—even if for just that moment. This is the kind of Christian love to which we’re called.

Be present with people, listen, and when necessary weep.

All scripture quoted is from the NRSV translation.