Seize the Day or Who’s the Greatest Remix

November 26, 2018 by MelisaB · Comments Off on Seize the Day or Who’s the Greatest Remix 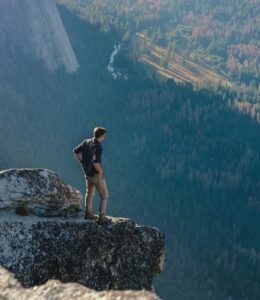 What is it about Jesus talking about his impending death that causes the disciples to argue about who’s the greatest? Could it be the very obvious, if not crass, reason that they want to figure out who will be the next leader after Jesus is gone? We don’t know if there’s a direct connection. We do know that James and John are simply doing what many successful people do, they were seizing the day.

This conversation also follows the interaction between Jesus and the rich young ruler. In this conversation Jesus challenges a rich man to give all he has to the poor. The man couldn’t do it and walked away sad. Jesus tells his followers that it’s hard for the rich to enter heaven. He then tells them the first shall be last and the last shall be first.

As fishermen James and John were probably poor and not influential in society. So they may have been mulling that interaction over. They might have concluded they’d be good candidates to rule since they were already poor.

The First Will Be Last

After Jesus addresses their request, he gives a bit of wisdom similar to what he said about the rich young ruler. He tells them:

This is unmistakably similar to “the first must be last”, but it’s more specific. This is a variation and it’s tailored to James and John—whoever wants to be great must serve. It’s not just the rich who have to evaluate themselves, everyone, even the disciples had to check their motivations.

We all want to matter, we want our lives to have purpose. Were the other disciples angry because James and John wanted to be great or were they angry because they didn’t get to ask first? We can’t strive to get ahead in God’s kingdom, we have to surrender. Simply reducing our sin doesn’t get us closer to God. We need to admit that we can’t make ourselves perfect, we need Jesus to transform our lives.

Even Jesus didn’t attempt to be great as we think of greatness. Jesus came to do what we couldn’t do for ourselves. In the letter to the Philippians, Paul quotes one of the earliest songs about Jesus, the Christ hymn:

In your relationships with one another, have the same mindset as Christ Jesus:

Who, being in very nature God,
did not consider equality with God something to be used to his own advantage;

rather, he made himself nothing
by taking the very nature of a servant,
being made in human likeness.

And being found in appearance as a man,
he humbled himself
by becoming obedient to death—
even death on a cross!
-Philippians 2:5-8 NIV

Jesus already had stature and power. He willingly gave that up his position. That was the only way we could be reconciled to God. He wasn’t resentful that this was his path. The gospels tell us Jesus looked on the crowds with compassion and loved them. Jesus forgave those who mocked and killed him, knowing they couldn’t possibly understand their own deep need for God.

Whether you’re looking for national recognition, or just taking the people in your life down a peg, choosing a path of greatness is to walk to the back of the line. Jesus identified with the “least of these”. Following Jesus means to love and forgive, even your enemies. Leadership in the kingdom of God looks like service, especially service to the powerless.