…but my friends call me Mel 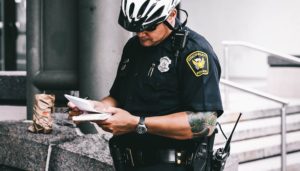 Recently my car’s registration came due and I was surprised to find a bill enclosed for a parking ticket that I had already paid. I dug up the canceled check, cashed months ago by the Department of Parking and Traffic (DPT). I photocopied it and sent the copy to the DMV with my registration payment. All taken care of, right?  A couple of weeks later I received a reply stating that the DMV can’t settle disputed tickets. My irritation started to grow as I envisioned a day standing in lines at the courthouse, so I put if off for as long as I could.

On the day that I finally decided to handle the problem, I spent my first half hour battling with other drivers for a parking spot on the street—any spot.  Admitting defeat, I pulled into a lot and paid the attendant so I could park, all day if I wanted to.  I walked several blocks in the rain to the courthouse where I waited for a guard to look through my purse and hand it back to me after I stepped through a metal detector.

I proceeded to the room where you can pay or dispute tickets.  The cop asked me for my driver’s license number so he could look up my record on the computer.  When he saw that it was a parking ticket, he informed me that they only handle moving violations and I needed to go to the DPT building to resolve my ticket.  He gave me a printout that would expedite the process once I got there.  “At least he was a nice cop,” I thought as I left.

Getting to the DPT

To get to the DPT I had to walk several blocks through a not-so-great neighborhood.  About halfway there I see a homeless guy approach another guy and ask him something.  The other guy shook his head, but the homeless guy walked beside him for a few paces before he gave up.  “There’s a man walking a few paces behind me,” I thought.  “If I slow down we’ll walk by this homeless guy at the same time.  “Okay,” I thought to myself, “look straight ahead and don’t make eye contact.  There, we’re past, but now I’m walking next to this stranger, speed up before it gets awkward.”

As I got near the DPT I started to think about how the conversation might happen.  What do I say if the agent doesn’t believe me? I could act inconvenienced and angry, but what if that sets them against me?  I’ll have to play it by ear when I get in there.

Finally in line, I try to size up the two clerks, a man and a woman.  Which one would be better, man or woman, woman or man?  Man. “God, let me end up in the man’s line,”  I pray as I anticipate how to act when I tell my story.  Part of the problem is that these people only know me by my license number and our only relationship is based on what their computer says about me.  Currently, their computer says that I didn’t pay that ticket and those clerks are probably more inclined to believe their computer than me.  My turn–I end up in the woman’s line.

I Hate Being a Number

I hand her the paper that the cop gave me—it already has my number on it.  My number, I hate that.  I’m not a number, I’m a human being!  She takes my information and I’m left standing at an empty window for a very long time.  I find myself thinking about what it means to be a number.  I think about the references in the Bible about the anti-Christ and the “mark of the Beast.”  This mark is supposed to show a person’s alliance with the anti-Christ and their opposition to Jesus.

“He also forced everyone, small and great, rich and poor, free and slave, to receive a mark on his right hand or on his forehead, so that no one could buy or sell unless he had the mark, which is the name of the beast or the number of his name.” Revelation 13:16-17, NIV

Sometimes Christians try to second guess what that “mark” will be.  Some believe it will be a number handed to us by the government because of the phrase “the number of his name.”  My name has a few numbers associated with it already—different numbers for different agencies. However, in the days that John received this revelation, the concept of numbering someone’s name may have seemed odd.  Now it’s commonplace.  It makes computer use more expedient, even if sometimes it feels a bit dehumanizing.

I look around at the people corralled in between ropes waiting their turn.  I look across the counter at the people corralled in their workstations.  The employees look just as dehumanized as those waiting in line.  I always think of them as “the DPT”. One big group of people whose mission in life is to extort money for the government through tickets.  Categorizing people in this way is just as degrading as numbering them.  I’m not sure what the “mark of the Beast” is exactly, but I think one of the resulting effects has to do with dehumanizing people.

When Jesus walked the earth he humanized people, he related in such a way as to build them up.

“Jesus entered Jericho and was passing through.  A man was there by the name of Zacchaeus; he was a chief tax collector and was wealthy.  He wanted to see who Jesus was, but being a short man he could not, because of the crowd.  So he ran ahead and climbed a sycamore-fig tree to see him, since Jesus was coming that way.  When Jesus reached the spot, he looked up and said to him, ‘Zacchaeus, come down immediately. I must stay at your house today.’

So he came down at once and welcomed him gladly. All the people saw this and began to mutter, ‘He has gone to be the guest of a “sinner.”’ But Zacchaeus stood up and said to the Lord, ‘Look, Lord!  Here and now I give half of my possessions to the poor, and if I have cheated anybody out of anything, I will pay back four times the amount.’   Jesus said to him, ‘Today salvation has come to this house, because this man, too, is a son of Abraham. For the Son of Man came to seek and to save what was lost.’ Luke 19:1-10, NIV

Earlier in John’s revelation God promises a new name to those who overcome.  To be on a first name basis with someone implies a relationship with them.  To know their nickname or to have a term of endearment implies you are friends.

My day at the DPT office is a true story consisting of real people with whom I interacted; yet I know none of their names.  I didn’t number them, but in my heart I had them categorized to shield myself from having to get to know any of them.  These are all people I could have met while getting my car’s registration worked out.

The DPT clerk (not her real name) came back to the window with a receipt for me to mail to the DMV.  Contrary to my assumption, she took my cancelled check at face value and corrected the mistake on the computer.