December 29, 2018 by MelisaB · Comments Off on Listening With Humility 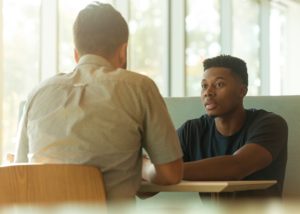 The Gospel of Mark shows us the perspective of the teachers and religious leaders through this interaction. We can see some of what they thought about Jesus. They’re vetting this grass roots teacher. Jesus didn’t have the lifelong education and training they had. He didn’t go to seminary, he wasn’t affiliated with a mega-church, and the fringe people in society were drawn to his teaching. The religious leaders needed to check out his theology because their people were listening to Jesus.

Not only was Jesus teaching without their permission, but he often added another layer of thought that implicated the religious leaders somehow. Sometimes he broke the laws found in the Scriptures—evidence for them that something was amiss. Some of the people were supporting him financially. That’s money that should be given in support of the temple. This blue collar teacher was only of concern because the crowds loved him. How would the religious leaders get anyone to follow all of the carefully taught laws if this cultural icon was breaking them?

Some of the religious leaders that challenged Jesus were trying to stop him at all costs, but some were sincere. Some were doing their due diligence. As people responsible for the spiritual care of the masses, they wanted to make sure the people weren’t being duped by a false teacher. This interaction is one of those sincere conversations.

This scribe is testing Jesus on his understanding of the law and is pleased with his answer. The scribe understands the heart of the law, and affirms Jesus. The scribe adds on to the answer Jesus gave to explain why it was correct. This could easily look like hubris–this scribe is explaining to God why he answered correctly about his own law. If we look at it through the lens of the scribe, he just sees a man teaching crowds, and he answered an important question correctly. The scribe wants to make sure Jesus understands his answer.

Here’s where I want to pull on the brakes before we get to the punchline. Let’s flip the conversation around and look at it through the lens of Jesus. You might think you were already doing that if you’re a Christian, but rooting for Jesus is different than being Jesus. We can’t know his lens, but let’s guess at it.

Jesus as God is walking among his creation. He’s God incarnate as a human, but still sees everyone he meets as a beloved child, an image bearer of God. The scribes, lawyers and pharisees see him as an anomaly or a threat and often oppose him. Like any group, they are made up of individuals who have their own personal opinion about Jesus. When they question him they have different motives, which Jesus is able to perceive. When this particular scribe questions Jesus, he humbly answers him. Jesus loves him, perceives his sincerity, and gives him a straightforward answer. We see the scribe’s sincerity after he gives his response.

Pause right there. One takeaway from this story is that each interaction you have with people should be a fresh interaction. Certainly societal groups have similarities among their members, which is why they gravitate towards each other. Some groups should be avoided if they pose a danger. Jesus certainly avoided danger at times. However, once we’re conversing with a single person, we need to remind ourselves to stop thinking in categories and soundbites. We need to listen, and engage in the nuances of that conversation. Especially when the person is part of a group in which we don’t belong.

Christena Cleveland describes the sociological reasons for categorizing people within groups in her book Disunity in Christ. She does an excellent job of explaining why it’s important to be aware of this default and to work toward bridging the gap between people.

Jesus listened with humility and gave an honest answer. Even in his corrective at the end where he tells the scribe he’s not far from the kingdom of God, I hear Jesus saying this gently. He’s trying to reach this man within his context. As I wrote about in #notallpharisees, Nicodemus was also sincere in his questions. After an honest conversation with Jesus he went from questioning Jesus to questioning his fellow pharisees.

Unlike Jesus we can’t clearly see another person’s motivations. We need to use wisdom and intuition when we interact with people, especially if they’re a part of a group that’s dangerous to us. As we interact, let us not be satisfied with lumping people into categories, but instead listen closely and interact with humble honesty.