February 9, 2019 by MelisaB · Comments Off on Jesus and Mandatory Minimum Sentencing 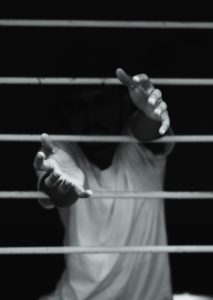 John 18 describes the arrest of Jesus and the beginning of his trial. This text focuses on the conversation between Pilate and Jesus. Before this Pilate is trying to get off the hook because it’s obvious the charges against Jesus are exaggerated. When he agrees to proceed, it’s clear that this trial will result in an ancient version of mandatory minimum sentencing.

I’m not being clever or relevant. This is what’s happening here. The religious leaders find something on which to charge Jesus. It’s clear to Pilate that Jesus is not a threat to the empire. He tries to push this trial off onto the local courts because to try him for treason would mean execution. Jesus and the disciples obviously aren’t making a power grab for anyone’s throne, but since his accusers push for this trial Pilate has no choice but to have Jesus executed.

Jesus knows the pain of betrayal and the injustice of a false charge. Here Jesus is identifying with those who are targeted by unjust governmental systems. Pilate wants to give him an “out”. You can be sure that Jesus perceives what he’d need to say to tip the scales in his favor. Jesus doesn’t cooperate with Pilate’s musings about truth. He mostly remains silent and receives an unjust sentence as many before him have received and many after him continue to receive.

Yes, this was part of the redemption plan. However, with Jesus it’s never just one thing. Jesus very clearly identifies with the oppressed. As I wrote in Defender of the Poor, God does take sides. Sometimes God does this through the hard path of experiencing what the oppressed experience.

I could talk theoretically about what the oppressed people of the Roman empire experienced, but I don’t want to. Today, in America, we are enslaving people through mass incarceration. The numbers of those in prison are the highest in our history. We even have the highest percentage of our population imprisoned in the world—even the parts of the world that we Americans think of as “third world” and barbaric.

Mandatory minimum sentencing allows injustice to occur against minor offenders without a villain to blame. We as a society can just shrug and say the defendant should have followed orders better, while they are locked up for the rest of their lives, or buried. You can move on without stopping to question whether the punishment fits the crime. We can do this without asking whether there was even a crime.

I haven’t studied the justice system enough to write about the skewed laws that are built into it. I can’t adequately describe the sociological reasons why African American men and women are incarcerated at higher rates than other races or how this is orchestrated by systemic bias. There are many books that describe this problem in depth, including Rethinking Incarceration by Dominique Gilliard. My challenge to you is to inform yourself about this system, which you as a voter have the power to change.

Jesus Stands with the Oppressed

This short scene with Pilate can be lost in the whole crucifixion narrative. It’s one small part of the Easter story. It may be small, but it’s a significant story for those who have experienced this kind of oppression. Jesus knows what “legal injustice” feels like.

When you have power (and yes, if you’re an American voter you do have power) it’s never okay to abdicate your responsibility to be informed when people’s lives are at stake. What will you do about it?