Jesus, Have Mercy on Me! 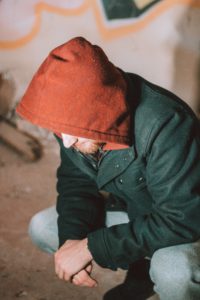 The sad truth is, often you have to be your own advocate. Even when people can see the issue you’re facing, even when they can see the turmoil you’re in, they still might not care. The good news is, we can all approach God with our need. As I wrote in Approach the Throne of Grace with Boldness, God welcomes us. People might not take the time to know our struggle, and some people, once they know, might not care. Sometimes, as we see in this story, the powerful try to silence those in need.

In this interaction Bartimaeus already knows that Jesus can heal him, and he knows that Jesus is passing by, so he petitions on his own behalf. He probably knew from experience that nobody would escalate his need—he was going to have to do it himself. This is his chance and he’s making his request known. The crowd is annoyed. They don’t just ignore him, they sternly order him to be quiet.

They sternly order a grown man, who is in need, to be quiet. This is power and privilege in a nutshell. This unidentified crowd feels like they have the right to silence a man in need. They’re willing to hoard all of Jesus’s time and miracles for themselves, while knowingly denying this man the same benefits. The age-old scarcity mentality could be at play: if this man gets some of Jesus’s care and attention, there will be less for them. Or maybe they want him to be patient and wait for a better time to get healed—a time that doesn’t inconvenience them. Or it could be as simple as an imagined hierarchy of who deserves to spend time with Jesus. We don’t know why the crowd reacted as they did, we just know they tried to shut him down.

This didn’t reflect the heart of Jesus when he walked the earth, and it doesn’t reflect the heart of Jesus now. I see an appalling lack of mercy among Christians today, who take up the cause of so many culture wars, while simultaneously ordering the marginalized to be quiet. We are not called to a facade of peace by forcing everyone to act like us. We’re called to bring real peace and to interact with people in love. This means we know them rather than just categorize them from a distance.

Jesus didn’t walk over and heal the man, or simply tell him that he’s healed. No, in this case he involves the very people who wanted the man to stop making a scene. Jesus tells them to tell Bartimaeus to come to Jesus. This isn’t just a “gotcha” moment, he’s helping them learn a new way of living in the world.

May our lives reflect the priorities of Jesus. Helping those in any kind of need isn’t a distraction, an annoyance, or unimportant. This is the real work. This is being a Christian.

Let us hear and respond with mercy to the pleas for help all around us.