I Will Make You… Fishers of Men? 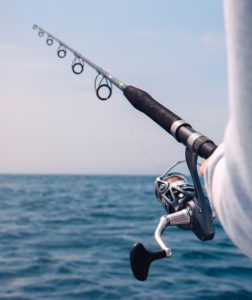 I’ve heard the story in Luke 5:1-11 most of my life, as far back as pre-K, in Sunday School. This is where Jesus tells Peter to put his nets back in the water after a night of unsuccessful fishing. Peter then gets the biggest catch he’s ever pulled in. At the end of this interaction, Jesus says, from now on you will be catching people. This story is a children’s Sunday School favorite. It’s easy to turn into pictures. Someone even turned it into a catchy children’s song, “I will make you fishers of men, fishers of men, fishers of men…if you follow meeeeee.” Jesus makes a side comment to one guy and it got turned into bad theology, that we peddle to toddlers.

You might be thinking, but Melisa, this is talking about evangelism! Aren’t we supposed to spread the good news? I can’t speak for what everyone, everywhere is “supposed” to do. What seems clear as a widespread mandate is that we’re to love, even serve, each other. Some are gifted in talking to people in a way that inspires belief. Regardless, this is still just a side comment to an individual.

A Problem With the Analogy

The problem with turning this comment into theology is that it has been used poorly. I think this happens in part because of the way we fish today as compared to the way they fished then. I have fished using a lure, which looks like a bug or a smaller fish. I’ve also fished using bait–something a fish would identify as food to cover up a hook. Modern fishing uses bait and trickery to snag a fish against its will to get it into our cooler. Much the same way, modern evangelism has used lure and often trickery to get people to come to a location where they will then be subjected to hearing a message they probably wouldn’t have opted in to attend if they had known.

In Peter’s day, fishing involved going to where the fish were and lowering a net. The idea was to pull the nets when a school was passing over them. The end result was the same, fish in a cooler, but rather than trickery, it involved paying attention to the fish and waiting. That’s still not how I want to interact with people and I’m glad this isn’t actually the point of this text. This is still just a comment to a fisherman as he’s asked to leave his job for a very different kind of life.

This was a message for Peter and it’s deeper than what we’ve turned it into. Peter was a skilled fisherman. When Jesus asks him for a lift in his boat onto the water so he could talk to the crowds of people, Peter had already been working all night. He’s cleaning his nets, and he’s tired.

After Jesus talks to the people, he tells Peter to let the nets down again. This is the last thing anyone would want to hear. It’s the end of his workday. Jesus isn’t a fisherman and doesn’t know what he’s talking about. It’s probably a little bit insulting or just ridiculous. Peter explains why this won’t work, but then humbly does what Jesus asks and is overwhelmed by the catch. It’s in this context that Jesus tells Peter that from now on Peter will catch people. It was a clever way to say, follow me.

Let’s follow Peter into this new call a bit to see how this plays out. The gospel feature many interactions between Jesus and Peter. Many of Peter’s comments and actions are misguided and receive anything from a gentle to a sharp correction from Jesus. Preachers everywhere have a field day with Peter, he becomes the bumbling sitcom sidekick—the comic relief of many sermons because hindsight is 20/20.

Peter was experienced in fishing, but now he’s talking to people, praying for people, answering trick questions from the Pharisees, witnessing miracles, not understanding the cryptic things Jesus is saying. He wants to save Jesus from execution as any follower would, he cuts a soldier’s ear off to prevent the arrest of Jesus. Later that night he denies Jesus. Either Peter is really out of his element, or there isn’t a person in all of history who would have looked competent standing next to Jesus.

Peter doesn’t suddenly get it after the resurrection either. In one gospel he doesn’t believe Mary’s account. In another gospel, he returns to fishing. He’s lost whatever faith he had. Then he re-encounters the resurrected Jesus who hangs out for a few weeks teaching them before returning to heaven. At this point, the followers of Jesus gather and pray because they don’t know what else to do. Suddenly, the Holy Spirit rushes into their prayer meeting. Everyone leaves the meeting and rushes outdoors. After such a bad track record for saying everything wrong, Peter, full of the Spirit, preaches to a crowd, telling them everything Jesus has done. Four thousand people believe at that moment, even though many of them don’t even speak the same language.

This miracle on the day of Pentecost is a mirror image of the overwhelming catch of fish. Not only were Peter’s best efforts were not good enough, he failed completely. When Peter is ready to pack it in, Jesus says, try it again. As Peter humbly responds to that call, listening to Jesus, listening to the Holy Spirit, responding to what God is doing in that moment, allowing himself to be a part of God’s work, he sees the result of that work, God’s results, God moving in the hearts and minds of the people present. He was a fisher of men, but not through trickery or coercion. Most of the people here are excited to hear what he has to say.

Your Call is Different

We are not Peter. Our work is different. The results may not even look impressive. Many faithful people didn’t see a massive response to their message. I don’t think we should have preconceived ideas of our role and our results, based on someone else’s role and results. What we should do is to stay in communication with God. Honestly pray about your disappointment. We should live humbly and be thankful when our work produces good results.

Have you felt like your best efforts haven’t produced much? Have you ever experienced God working in your life when you felt depleted?