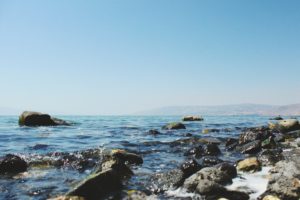 Luke’s retelling of the baptism of Jesus is so succinct, it allows us to see something very basic. While John was proclaiming, prophesying, and leading the people to follow the will of God. Jesus was in line with all the ordinary people to obey and get baptized by John.

So much can be said about this, especially recognizing that baptism is one of the sacraments of the church. What I want to look at here is the relationship between John and Jesus.

Last of the Prophets

John is the last in a long line of prophets for the people of Israel. The prophets lived into the role of God speaking to humanity through a chosen person. John’s enacting that role exactly as the prophets of old did. His parents were instructed by the angel to raise him in the way of the Levitical priesthood. As a man he lived in the wild eating bugs and wearing animal skins. I imagine the sight of him recalled memories of the ancient prophets such as Ezekiel and Elijah. He was the last because this role in their society was coming to an end.

Jesus in his incarnation is living into the role of humanity’s response to God. Jesus was human and God, but his purpose was to live in a way that no other human could. So in this encounter he humbly takes his place in line with the other people coming to obey and be baptized. He’s not self-deprecating, he’s decisively following God’s will.

Historically the kings and religious leaders of Israel would come into conflict with the prophets of old. There are stories retold of controversy, attempts at coercion, and even the slaughter of all the prophets during the time of Elijah. Here we see Jesus as teacher and king receiving John’s word, obeying John’s instructions, and repenting through the act of baptism. Jesus didn’t have anything for which to repent. This act of following John in this moment is also an incarnation act of receiving God’s word and God’s instructions as a human, as a teacher, and a king. It’s a redemption of past wrongs.

The redemption God offers us is thorough. This isn’t just a thumbing of the nose to the leaders of Israel’s past. This is redemption. We are all broken to varying degrees in our ability to hear and follow God. Jesus enacts this perfect obedience. When we follow Jesus we are given his spirit that transforms us and leads us in how to follow Jesus.

Where is the Spirit transforming your life? In what way is God calling you into humble obedience?